Mario is a famous video game character created by Nintendo. He is the main character in the Mario videogame series. He wears a red hat and shirt with blue overalls. 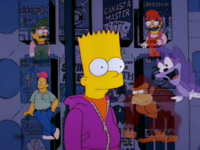 Mario and other video game characters tempting Bart to steal a video game.

Mario appeared as one of the four characters that convinced Bart to steal a copy of the Bonestorm video game from the local Try-N-Save. He appeared alongside his brother as well as Sonic, Donkey Kong, and Lee Carvallo, the latter being the only one trying to convince Bart not to take the game.[1]

Mario once came out of an Italian tour bus. He gets his brother Luigi to take a picture of him with Homer. He then insults Homer, who proceeds to throw barrels at Mario in a manner similar to Donkey Kong in the arcade/NES game called Donkey Kong, which is Mario's first game. Mario then begins jumping over the barrels and climbs unto Bart's treehouse to avoid them, but is eventually struck by one.[2]

Mario, along with his brother Luigi, was also one of the brothers Bart saw in Bro-Land during his dream.[3]

Mario appeared alongside a version of Donkey Kong called "Don Kong" in the game Don Kong.[4]

Mario and Donkey Kong appear at Hudson's house, with Mario working on the plumbing, Mario's job, and Donkey Kong throwing barrels at him, his main attack from the original arcade game. ("The Incredible Lightness of Being a Baby")

A gnome-like parody of him has also appeared, alongside his brother and many other Nintendo characters.[5]