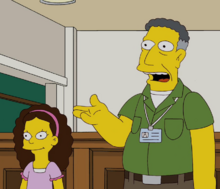 Jakob is an Israeli tour guide in charge of the Simpson family's tour to Israel. He is assisted by his niece Dorit.

Jakob is known for his stereotypically Israeli demeanor, most commonly saying, "Yalla, b'seder, you can shut up now!" and doing a lot of talking with his hands. He also repeatedly says "Shut your face" to the tour group, evidently either ignorant or uncaring that many English speakers are likely to find it offensive.

It is implied he took part in the famous 1976 Entebbe hostage rescue, as he claims he killed three Ugandans in Entebbe.[1]

His picture was seen when Lisa looked through her Ultranet Facebook friend requests.[2]