For the song, see Flaming Moe's (song).
"The inventor I admire is not a rich man or a famous man or even a smart man. He's my father, Homer Simpson."
―Bart Simpson

"Flaming Moe's" is the tenth episode of season 3 of The Simpsons and the forty-fifth episode overall. It originally aired on November 21, 1991. The episode was written by Robert Cohen and directed by Rich Moore and Alan Smart. It guest stars Aerosmith as themselves and Phil Hartman as Lionel Hutz. 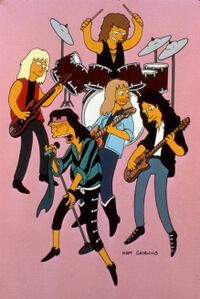 The promo image for the episode

"Homer tells Moe how he invented a bizarre drink called the Flaming Homer. It's so good that Moe steals his recipe, renames it the Flaming Moe and takes credit for inventing it. The Flaming Moe revitalizes business, turning Moe's Tavern into the hottest spot in Springfield, and causing Homer's and Moe's relationship to splinter."

Lisa was having a sleep over at the house with some of her friends, and Bart became the main target to the fun. Homer then decided to go to Moe's Tavern to get a drink of beer. Once Homer arrives at the tavern, he found that Moe and his tavern are in serious financial trouble. After he runs out of beer, Homer decides to tell him about a drink recipe that he accidentally invented one night, called the "Flaming Homer."

Homer explains that after Patty and Selma made the Simpson family watch slides from their latest vacation, he was unable to find a beer. He then decided to mix together drops of liquor from near-empty bottles and accidentally included a bottle of cough syrup. When Patty dropped cigarette ash in the drink and set it on fire, Homer discovered that fire greatly enhanced the flavor of the drink.

Moe, however, steals Homer's idea, renames the drink, and begins serving the "Flaming Moe" as his own concoction. Moe sees his business boom, and his tavern soon becomes one of the trendiest nightspots in Springfield and Aerosmith's official hangout. At this time, Bart attempts to prank him over the phone, but it backfires due to someone who goes by Hugh Jass. Homer becomes angry with Moe and vows never to return to the tavern. He subsequently becomes obsessed with Moe and how he betrayed him. He also tries to attend his "new watering hole".

During this time, a man from an establishment called Tipsy McStaggers attempts to buy the recipe from Moe. After Moe rebuffs him the first time, the man takes the drink and sends it to a lab to analyze what the formula is made of. Shortly after this, the man returns to offer Moe $1,000,000 for the recipe. Moe declines for a second time, but the guy warns him under his breath that their company has almost figured out the recipe, except for one ingredient.

After the waitress Moe has hired discovers that Moe stole the recipe from Homer, she convinces him to sell the drink and give half of the money to Homer. Moe is about to accept the deal when a seemingly insane Homer appears standing in the rafters and laughing madly. He angrily reveals to everyone in the bar that the secret ingredient is merely just cough syrup. With the secret revealed, the man from Tipsy McStaggers tears up the check and leaves. Within days, nearly all restaurants in Springfield are serving Flaming Moe's (under slightly altered names), and Moe's business has greatly decreased. Homer stops in and finds that Moe is not angry at him. Moe even serves Homer a Flaming Homer on the house.

It was written by Robert Cohen and directed by Rich Moore and Alan Smart. Aerosmith appears in the episode and were the first band to make a guest appearance on the show.