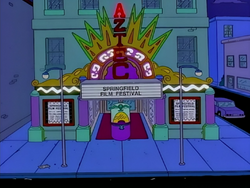 The Aztec Theater, site of the Springfield Film Festival. 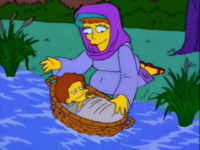 The voting produced a 2-2 tie between Pukahontas and A Burns for All Seasons. Homer later changed his vote to Pukahontas, which made it the winner, three votes to two. Ironically, the grand prize turned out to be a truck filled with a lifetime supply of Duff Beer.