The Wettest Stories Ever Told

"Until then, perhaps an old sea yarn may pass the time. Too bad I don't know any."
―Captain McCallister

"The Wettest Stories Ever Told" is the eighteenth episode of season 17 of The Simpsons and the three-hundred and seventy-fourth episode overall. It originally aired on April 23, 2006. The episode was written by Jeff Westbrook and directed by Mike B. Anderson.

"While waiting for the dinner at The Frying Dutchman, the family starts telling three stories about ships: "Mayflower Madman", "Stupidity on the Bounty", and "The Neptune Upending"."

The Simpsons are at The Frying Dutchman where they are waiting for a meal. Captain McCallister comes out to inform them that their meal will be late because the chef is having trouble with the day's special. Captain McCallister then suggests that an old sea yarn may pass the time, but then says that he doesn't know any. Lisa then offers to tell a story. 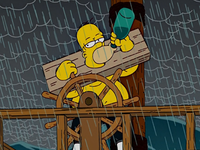 At Plymouth Harbor in England, Marge, Bart, and Lisa go aboard the Mayflower to journey to the New World. As they are getting on board, Homer runs up to the ship and hides in a barrel as he is being chased by two Beefeaters. Marge and the kids offer to disguise him so that he can go on the journey with them. Homer is introduced to the ship's captain, Ned Flandish, and told that they are all Puritans. Homer is upset to learn that they don't drink booze. When Homer tries to make a move on Marge, Moezekiel tells Homer that he is engaged to Marge, although Marge denies it.

During the voyage, Homer thinks that Moezekiel will marry Marge instead of him. Homer then strangles Bart for a comment that Bart made, which impresses Marge as her ex-husband used to strangle Bart in the same way. Homer and Marge then grow closer on the journey. Moezekiel gets jealous of how close the two of them are getting, so he comes up with a plan to make Marge hate Homer. Moezekiel shows Homer where the booze is stored and pours Homer a drink. Homer then quickly corrupts the crew, who are then discovered by Moezekiel, Captain Flandish, Reverend Lovejoy, and Marge. Homer is put into the stocks for his crimes and Marge is disappointed in him. At that point, a large wave hits the ship and causes Captain Flandish to bang his head, knocking him unconscious. Homer offers to steer the ship whilst drunk, as nobody else could do it. Homer then successfully got the Mayflower to the new world.

A year later, the Puritans thank the natives for their help settling in. Flandish then says that it makes him feel bad that the Europeans will eventually wipe them out and steal all their land, which scares Great Chief Wig-Gum.

After Lisa finishes her story, Homer says that he has a story. Marge tells Homer to wait for the third story and says that Bart can go next, as the middle story is usually the worst. Bart then goes on to tell his story. 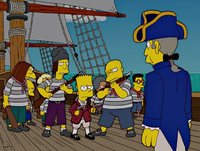 The crew of the Bounty mutiny against Bligh.

In England, the Bounty gets ready to set sail. Fletcher Christian tells his captain, William Bligh, that Admiral Nelson is trying to send them a message. Bligh looks through and sees Nelson share the message "Bligh eats dolphin boogers". The ship then sets sail. Seven hundred and eighteen days later, the ship starts to run low on fresh water, so Bligh tells the crew that they're now forbidden from drinking water. He then has Willie throw all their mail from home overboard as someone had drawn a sketch of Bligh making out with a merman. The crew start to get annoyed at Bligh and Willie warns him that there could be a mutiny. However, Bligh shrugs it off.

The Bounty stops at Tahiti to restock and let the crew rest. All the crew have a really good time at Tahiti and are disappointed when they have to leave. Bligh then orders the crew to forget Tahiti and then orders them to sing "Row, Row, Row Your Boat" as a round. The crew quickly gets sick of this and decides to mutiny and go back to Tahiti. After Bligh and Willie are thrown off into a rowboat, Willie also decides to kick Bligh off, who is then dragged under sea by a turtle. Christian becomes the new captain and decides to get rid of the ship's steering wheel as it is "evidence of the previous regime". This causes the crew to lose control of the ship and they end up at Antarctica.

After Bart finishes his story, Captain McCallister still hasn't returned as he is out playing basketball. Homer then goes on to tell his story. 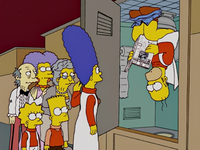 On the cruise ship Neptune, Disco Stu introduces Captain Burns to the passengers. Captain Burns tells everyone how the ship is unflippable and tells everyone to relax and have fun. The Simpsons then go on stage to perform as they are the ship's band. During the song, a large wave hits the Neptune and causes it to flip. In the aftermath, hundreds of people are killed, leaving only a handful of survivors.

As the survivors make their way up the ship, they work together to keep each other safe, but still lose people along the way. They eventually make it to the bottom of the ship, which is now above the surface. A rescue crew then cuts through the hull and the survivors get out and onto the lifeboat. As they escape, the Bounty passes by. The crew had all become skeletons in the many years that had passed since the Bounty mutinied. Fletcher Christian asks them if they know where Tahiti is, but doesn't get an answer. The Bounty then sails off, still in search of Tahiti.

Dan Greaney was the person who pitched doing non-Halloween trilogy episodes.[1] When the storyboards were sent to the writers, the ships in the first two segments looked almost identical. Jeff Westbrook then went on the Internet to get many pictures of ships to show to the animators for inspiration.[2]