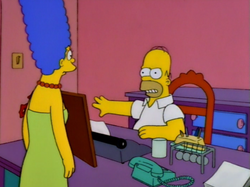 Compu-Global-Hyper-Mega-Net is Homer's Internet company. The company's headquarters is the dining room of 742 Evergreen Terrace. It is never made clear what the company sells or offers, however Microsoft's Bill Gates still buys out the company.

After Homer received the wrong mail that was meant to go to Flanders he started an online Internet service. Homer read and researched the "Internet" and he told Marge they were behind in the world of tech and he started a computer company that was destroyed by billionaire Bill Gates, after saying "Well, I don't get rich by writing a lot of checks!". He then he told his goons to "buy him out, boys", but when Homer got his hopes up the goons started smashing everything and he and Marge were trapped in the corner of their living room as people destroyed everything Homer worked for.