Count Dracula is a Transylvanian vampire. He is a member of the Springfield Republican Party. 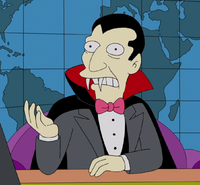 Dracula as a member of the Republican Party.

Dracula attended a Republican Party meeting to discuss Ralph Wiggum. He thought the other members were crazy for suggesting Ralph be the Republican candidate as Ralph isn't even allowed to use big boy scissors.[2]

Dracula was one of the monsters that weren't cool any more. He was seen at a Halloween party dressed as Iron Man. He and the other monsters (Frankenstein's Monster, Amenhotep and the Werewolf) were later seen being forced out of the party by their wives. Homer was then killed for no reason.[3]

Dracula was later revealed to be the father of Edmund. He and Homer travelled to Dracula-la Land to find Edmund and Lisa, who had run away together. Dracula and Edmund attempted to turn Lisa into a vampire, but when Homer intervened, they tried to turn him instead. However, when they bit him, they died from the high cholesterol level in Homer's blood.[1]

Homer said that introducing Bart to a baby brother would be like introducing Frankenstein to Dracula.[4]

This section is transcluded from The Simpsons: Tapped Out characters/Treehouse of Horror XXVIII Adults. To edit it, please edit the transcluded page.