"He's in your face from outer space!"
―The show's tagline[src]

UpscAlien in da House is a sitcom which originally aired in the 1990s. Re-runs of the show are shown on Tube Town.

The show is about a young alien named Trey who is from "the fanciest planet in the Milky Way". Trey stole his father's spaceship, took it for a joyride and flew to Earth, where he saw Lake Erie from orbit and landed there to take a swim in the lake. For reasons unknown, he decided to stay on Earth and moved in with an upper-class family. 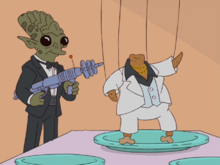 Trey zaps a turkey.
Trey owns a ray gun which is capable of transforming people and objects. In the scenes that were shown, Trey was seen using it to make a cooked turkey get up and dance, and to transform a neighbor man into a girl alien in a prom dress, with whom he then started dancing.