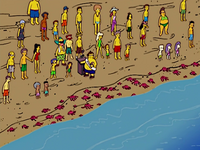 The Jellyfish Festival is an annual event that occurs on "the third Tuesday of May sweeps" that celebrates the return of the Stinging Red Jellyfish. 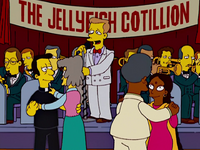 In the morning, Springfield residents gather at the beach to watch the jellyfish return. At night, a Jellyfish Cotillion is held, which includes dinner and dancing to the song "Jellyfish". It appears to be a very romantic event.

According to Dr. Hibbert, people were originally excited by the return of the jellyfish because "in the old days, people thought jellyfish venom had curative properties. Now we know it just makes things a whole lot worse."