"Wild Barts Can't Be Broken" is the eleventh episode of season 10. It originally aired on January 17, 1999. The episode was written by Larry Doyle and directed by Mark Ervin. Cyndi Lauper guest stars as herself.

"Homer and his drunken cohorts celebrate an improbable victory by the Springfield Isotopes by trashing the local elementary school. But when the police force fails to locate the actual vandals, the town's children are hastily blamed for the rowdiness and punished with a new sunset curfew."

At the Springfield War Memorial Stadium, Cyndi Lauper is singing "The Star-Spangled Banner". After she finishes, everyone started to leave the stadium only to be reminded that there is a baseball match about to start. The Springfield Isotopes then enter the field and start to play the game. Homer gets quickly fed up of them playing badly and leaves the stadium early, getting the car ready for the rest of the family. The rest of the family comes out and gets in the car where Marge tells Homer that the Isotopes lost the game. At Moe's Tavern, the Isotopes are playing another game and were winning. Upon hearing this, Homer quickly changes into an outfit and gets a giant foam finger and starts to cheer for them, being seen by Kent Brockman and thought to be a super fan.

After the Isotopes won their game, Homer, Lenny, Carl and Barney all got drunk to celebrate. Homer drives them around town where they see the baseball field at the Springfield Elementary School and drive around it. They then drive through the school and trash it, eventually getting together in the locker room showers and singing naked. The next day, Homer wakes up with a massive hangover, not being able to remember what he did the previous night. On the news, the school is revealed to be trashed. With no suspects, Chief Wiggum blames kids for it and orders a curfew for all kids to be home before sundown, which annoys Bart and Lisa. Later that day, the kids were out playing when an ice cream truck comes by. Before they can go to it though, Chief Wiggum sends all the children home. The kids all go home where they become bored. 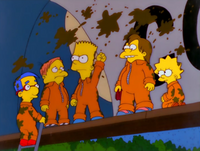 The kids decide it's time to fight back

The next day, the kids are in the playground at school discussing the curfew and how they all hate it. That same day, a large billboard of Chief Wiggum is installed in town telling kids that they are being watched. At home that night, Bart and Lisa are bored again and watch primetime television. Then an advert for The Bloodening comes on, which interests both of them. Bart and Milhouse then spread the word to all kids that they're going to watch the film at the Springfield Drive-In theater, breaking curfew to do so.

That night, all the kids sneak out of their houses to go see the film. After watching it, Chief Wiggum catches them all and makes them all do community service, cleaning the billboard. Annoyed at this, the kids decide to come up with a plan where they reveal the adults secrets like the kids in The Bloodening did. They set up a radio station behind the billboard and started to broadcast the secrets. The next day, a town meeting is called to discuss this. During the meeting, another broadcast is held. Chief Wiggum and Professor Frink then work to track down the broadcast, finding it behind the billboard. There's a standoff between the adults and kids, which results in an argument via song. During this, the senior citizens come along and are annoyed at all the noise keeping them awake. A vote for a curfew of everyone under the age of 70 is held and it passes by one vote because all the seniors voted and Homer didn't. The senior citizens then take the night for themselves, out playing in the street.

Mike Scully wanted to do an episode where the kids of Springfield had a curfew. He came up with the idea for an episode where the kids and adults face off with the kids being blamed for something the adults have done.[1] The baseball announcer Dennis Conroy is named after writer Larry Doyle's uncle. Dan Castellaneta ad-libbed Homer singing the line "Hitler is a jerk, Mussolini..."[2] This was only added to the episode in order to fill time.[1]