"Weekend at Burnsie's" is the sixteenth episode of season 13 of The Simpsons and the two-hundred and eighty-fifth episode overall. It originally aired on April 7, 2002. The episode was written by Jon Vitti and directed by Michael Marcantel. It guest stars Phish as themselves.

"After being attacked in the garden by an unruly group of crows, Homer goes to see Dr. Hibbert about the ongoing pain in his eyes. Dr. Hibbert suggests that Homer begin smoking marijuana for medicinal purposes." 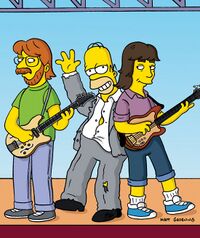 Marge serves the family dinner with genetically modified vegetables because the vegetables were bigger. However, after seeing a potato eat a carrot, Marge decided to grow her own vegetables in the back yard. After making a vegetable patch and planting the seeds, crows started attacking the vegetable patch so Marge made a scarecrow. When Homer came home one day, he saw the silhouette of the scarecrow and got scared. He then came back and attacked it, destroying it. After doing this, the crows treated Homer like an alpha-crow because he killed their enemy. After the crows take Maggie for a flight and drop her, Homer tells them that they went too far and he wanted them to go. The crows then attacked Homer, injuring his eyes.

At hospital, Dr. Hibbert tells Homer that medical marijuana could help him with the pain in his eyes. Homer remembers a bad incident he had when he was a teenager, with a police dog attacking him as he had marijuana, and initially refuses. However, Dr. Hibbert convinces Homer to give it a try. Homer starts to smoke the marijuana, much to the annoyance of Marge. He continues to go to work and act as normal throughout his medication usage and gets closer to his family and Ned Flanders. Ned convinces Homer to sign a petition to criminalize medical marijuana when Homer doesn't realize what he's signing.

At the Springfield Nuclear Power Plant, Mr. Burns is reading jokes to Waylon Smithers, Jr. for a potential investors meeting. Homer then comes into Burns' office, thinking it was the toilets, and laughs at Mr. Burns' jokes. Burns then promotes Homer to executive vice president because he'll laugh at all of Burns' jokes. Homer then goes home where he reveals to Marge that he got promoted. Later that evening, Homer and Otto are hanging out in the attic of the house, watching TV together. At that moment, a news report comes on talking about the election to re-criminalize medical marijuana. Homer and Otto decide they have to do something about this and set up a Phish concert at a rally to support medical marijuana. During the rally, however, they realize that they missed the vote, which was the day before, and medical marijuana was re-criminalized. Homer then stopped taking it as a result.

Back at home, Homer gets back to his old way of life, kicking Otto out and making up with his friends, who were considering an intervention. Homer then goes to Burns' manor to get ready for the investors meeting. After both he and Smithers fail to find Burns' jokes funny, Burns goes to take a bath. Homer and Smithers then get high so they can find the jokes funny and forget about Burns. After realizing Burns had been in the bath for an hour, they ran into the bathroom to find him dead. They decided to carry on with the meeting and turned Burns into a puppet, with Smithers pulling the strings and Homer talking on Burns' behalf. During a dance routine, Mr. Burns' heart started again. Burns then made Smithers slap Homer, Smithers and himself several times.

The idea of the episode was pitched by George Meyer. Al Jean found the idea funny and assigned Jon Vitti to write the first draft.[1] Jon Vitti wrote the script at his home and didn't participate in any of the rewrite sessions.[2] After being attacked by the crows, Homer was originally supposed to look more bloody. The staff decided to change this.[1] The staff debated what to do with Homer's eyes when he was high. Since a common side effect is dilated pupils, they dilated them slightly. One of the suggestions was to also widen his pupils.[3] George Meyer pitched the idea of Phish guest starring in the episode.[1]

Al Jean said that the writers wanted to explore both sides of the debate on marijuana usage rather than making a statement. He also said that the episode is a critique of legalisations that are immediately criminalized again after.[1] The scene at the beginning of the episode with the genetically modified vegetables was conceived during a rewrite and was originally three times longer. Even though genetic modifying is portrayed in a negative light in the episode, none of the writers were against it.[4]

In an opinion column in The Seattle Times, Robert S. Stephens and Roger A. Roffman wrote about the episode, saying that we rarely see the benefits of drug usage in television as we usually only see the negatives. They praise the episode for showing both the positive and negative effects of usage.[5]