Vivienne St. Charmaine is a former actress and the girlfriend of Abraham Simpson. 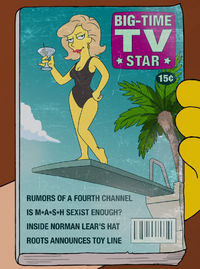 That night on Channel 6 News, Kent Brockman reported that Vivienne St. Charmaine had fallen off the cruise ship and was presumed dead, with Grampa being the murder suspect. Grampa had no memory of the cruise, due to alcohol and being senile, and Kent Brockman started a podcast about the murder, Guilty Grampa. Eventually, Grampa listened to the podcast and confessed to the murder because he was sure he did it, even if he couldn't remember.

Dr. Hibbert then went to Grampa's rescue and revealed that during the colonoscopy, he had made them swallow pills that tracked each person. After Vivienne fell off the cruise ship, she swam to shore then escaped to Mexico. Grampa was set free but was upset because he thought Vivienne was going to be his final girlfriend. Vivienne then went back to Springfield and revealed to Grampa that their plan was to have Vivienne fake her own death so that Grampa could inherit the insurance money and join her in Mexico where they would live out the rest of their lives together. However, Grampa forgot all about the plan. Vivienne then moved in with Grampa in the Retirement Castle.