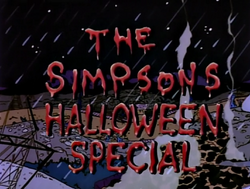 The Simpsons Halloween episodes, more commonly known as Treehouse of Horror series, are an annual tradition in which there is a special Halloween episode consisting of three separate, self-contained pieces. These pieces usually involve the family in some horror, science fiction, or supernatural setting; they always take place outside the normal continuity of the show (and are therefore considered to be non-canon), and completely abandon any pretense of being realistic. 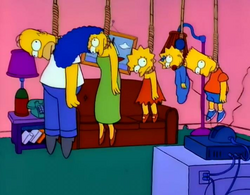 The Couch gag in Treehouse of Horror VI.

Regular Simpsons characters play humorous special roles, occasionally being killed in gruesome ways by zombies, monsters, or even each other. Groundskeeper Willie has died many times in the Treehouse of Horror episodes, mostly by being stuck in the back with an axe, impaled by a sharp object, burned by a furnace and even once by a dolphin.

The Halloween episodes also regularly parody many classic horror and science fiction films and episodes such as "The Shining", "Nightmare at 20,000 Feet", "To Serve Man", "Living Doll", "It's a Good Life", "A Kind of a Stopwatch", "The Little People" and "Little Girl Lost".

According to DVD commentary, the reason why the episodes are non-canon is a trade-off for the writers. Writing three 7-minute segments was just too taxing for the writers, so it was proposed that they could do anything without worrying about continuity to appease them.

The yearly Halloween special was named "Treehouse of Horror" because the original special depicted the Simpson children in their treehouse telling scary stories to one another. In later years the series dropped the framing device of characters telling stories, but kept the Treehouse title. 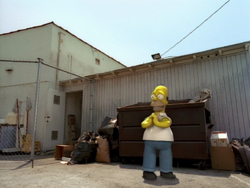 The 3D Homer from Treehouse of Horror VI.

In a section of "Treehouse of Horror VI" called "Homer³," Homer and Bart go into a three-dimensional world, which Homer likens to Tron, created by Pacific Data Images, a computer animation company that would later produce Shrek. This segment from the Halloween episode was also used as a segment of a film shown in the IMAX 3D film Cyberworld. This was the first and one of the few times The Simpsons have strayed from their traditional 2D animation, and the longest, as other moments consisted of live action couch gags or short claymation or CGI television and film parodies. Other Treehouse segment name parodies include "Citizen Kang", "Nightmare on Evergreen Terrace", "The Thing and I", "Hex and the City", "House of Whacks", "I've Grown a Costume On Your Face", "The Shinning" and "Reaper Madness".

For several years the characters broke the fourth wall and introduced their pieces directly to the audience. In "Treehouse of Horror II" the writers decided to give the cast and crew of the show scary names in the opening and closing credits (like "Bat Groening" and "James Hell Brooks"). This also became a tradition, and has been done in every Halloween episode since October 25, 1990 except for XII and XIII. The names have changed in subsequent seasons, with the exception of Sam Simon's, who left during the fourth season. He has since remained "Sam 'Sayonara' Simon." 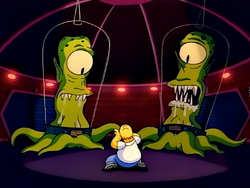 Homer encounters Kang and Kodos after being abducted by them in Treehouse of Horror VII.

Another mainstay of the Halloween shows is the appearance of the two space aliens Kang and Kodos, introduced in the second segment of the first "Treehouse of Horror." However they are not always important to any story in the special; starting with "Treehouse of Horror III" they began appearing just to keep up the tradition. While they have had significant parts in other "Treehouse of Horror" episodes, they often only appear in the middle of a totally different story, for example, a story about zombies attacking the town will suddenly turn to them in space, watching the events and laughing maniacally at the Earthlings' suffering, before switching back to the actual story. In later years they would sometimes appear at either the beginning or end of the episode, outside of any of the stories; for example, one year they appeared between the last segment and the credits wondering why The Simpsons producers hadn't called them to be in the episode. Soon they get a call offering them to be on a commercial for something called "Old Navy".

Also, at the start of Treehouse of Horror I, II, and V Marge comes out with a message urging parents not to let their children watch the program as they will suffer from nightmares; however, she gives up, saying how no one ever listens to her. This was abandoned in later seasons because the length of each episode has been reduced significantly since first few seasons and because by then the writers were sure that everyone was aware that the shows are scary. Another tradition they abandoned was including tombstones with humorous messages in the opening credits: the credits for Treehouse of Horror V include a single tombstone with the words "Amusing Tombstones" to signal this.

Although the Treehouse series is meant to be seen on Halloween, in recent years new installments have premiered after Halloween. This is due to Fox's current contract with Major League Baseball's World Series and Playoff games. If the Series does not go the full seven games, Fox usually airs the previous season's Treehouse episode on the Sunday before Halloween (or if Sunday happens to fall on Halloween). However, it has been known on many occasions for new shows to premiere on the West Coast only in time for Halloween regardless of how long the World Series lasts. It gets the full national premiere, of course, as scheduled in November, after Halloween. Another reason for the late airing is that during November, Nielsen Media Research conducts one of its four annual sweeps months - in recent years, the annual Treehouse of Horror episodes tend to draw some of the highest ratings of the season to which it belongs. Between Treehouse of Horror XI to Treehouse of Horror XIX and Treehouse of Horror XXI was aired in November.

FOX's arrangement with Major League Baseball was made fun of in the opening sequence for "Treehouse of Horror XVI". Kang, frustrated that the episode is being delayed by a World Series baseball game, decides to "fast forward" the game, but overdoes it, sucking the Earth, the universe, and everything else (including God) into nothingness. He then leaves a sticky note, which shows the title. Another joke about the programming of Halloween episodes in November appears in "Treehouse of Horror XIV", where Kang looks at a TV Guide and says, "Those humans. They're showing a Halloween episode. In November!" Kodos replies, "Who cares about Halloween? We've already got our Christmas decorations up!" The camera then cuts to a shot of the fireplace with Christmas decorations, complete with multi-legged stockings and alien reindeer, scattered about, and festive Christmas music plays over the opening credits.

In 1995, Matt Groening's Bongo Comics Group, a company specializing in Simpsons-based publications, began a series of comic book adaptations of the Treehouse of Horror series. These annual editions are released in September each year, and as of September 2011 there will be seventeen issues available. Originally, guest writers from other comic book companies were invited to submit scripts to Bongo, where the comics themselves would then be drawn by Bongo staff. Beginning with #5 (1999), the "guests" were allowed to submit both stories and art, wherein at the most Bongo would only supply the lettering and colorings of the stories [however, there are few cases of this rule being broken; i.e., "The Catastrophe on Substitute Springfields" (#7, 2001) and "The Legend of Batterface" (#10, 2004).

The comics are very rare to find, especially #7, but they have been re-released in comic compilations.