"Treehouse of Horror IV" is the fifth episode of season 5 of The Simpsons and the eighty-sixth episode overall. It is also the fourth installment in the Treehouse of Horror series and consists of three parts. It originally aired on October 28, 1993. The episode was written by Conan O'Brien, Bill Oakley, Josh Weinstein, Greg Daniels, Dan McGrath and Bill Canterbury and directed by David Silverman.

"When Homer announces he will sell his soul for a donut, the Devil, disguised as Ned Flanders, shows up to take him up on the offer. Second Act, while riding to school, Bart believe he sees a malevolent gremlin on the side of the bus. And final act, Mr. Burns is Dracula, in a spoof of Francis Ford Coppola's vampire film."

The camera zooms into a graveyard showing various tombstones and the Simpsons home. The Simpsons break the floor and sit on the couch as zombies.

Bart's seen walking around a room with paintings in light of Rod Sterling's Night Gallery and tries to introduce the show but Marge and Maggie interrupt telling Bart to tell the viewers the show's scary, but Bart ignores, and we watch the first part.

The Devil and Homer SimpsonEdit 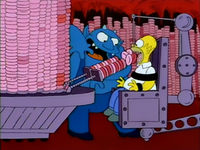 Homer being force-fed donuts in Hell, much to his happiness

Homer falls asleep at work, dreaming of a donut fashion show. When he wakes up to get one to eat, he finds out from Lenny and Carl the remaining donuts were already eaten, with some being thrown at Grampa Simpson. Homer declares that he'll sell his soul for a donut, causing the Devil (in the form of Ned Flanders) to appear. After signing a contract, Homer's given his donut, with the provision that as soon as he finishes it, the Devil will own his soul. However, Homer finds a loophole: if he doesn't finish the donut, he's safe. Homer openly mocks this loophole, to which the Devil promises he'll go to Hell eventually. One evening, Homer goes down to the kitchen, and, without thinking, eats the last of the donut.

As expected, the Devil comes to take Homer's soul, but Lisa asks him to hold a trial. The Devil agrees. However, Homer must spend the day in Hell being severely tortured. Aside from being chopped into pieces, a demon in the Ironic Punishment Division tried to torture Homer by feeding Homer all of the donuts in the world (this plan backfires when Homer gleefully keeps eating, much to the confusion of the demon). Back on Earth, Marge already has the trial area set up and hires Lionel Hutz to defend Homer.

The Devil and Hutz barter on specific terms before the trial begins: The Devil agrees to Hutz's request for bathroom breaks, and Hutz agrees the Devil can choose the jury. The Devil's jury includes Benedict Arnold, Lizzie Borden, Richard Nixon (still alive at the time), John Wilkes Booth, Blackbeard the Pirate, John Dillinger, and the 1976 Philadelphia Flyers. The Devil gives the evidence of the contract Homer signed, pledging his soul for a donut. Lionel Hutz counters with the definition of a contract according to the dictionary, stating it as something unbreakable. Realizing he put his foot in his mouth, Hutz asks to be excused to the bathroom. When he doesn't return immediately, Marge finds the bathroom window open, and Hutz long gone.

As the judge prepares to sentence Homer, Marge shows the jury a photo album showing their wedding day, where Homer's having eaten the entire wedding cake sent him to the emergency room. On the back of a photograph, however, it is revealed in a statement of love to Marge that Homer had pledged his soul to her. This causes the jury to declare Homer's deal with the Devil void as Marge owns Homer's soul. However, the Devil is unwilling to let Homer best him. With a zap of his power, the Devil turns Homer's head into a donut. The next morning, Homer can't stop eating parts of his head. As he decides to go to work, Lisa cautions him to stay home ... because standing outside the house is the Springfield Police Department, waiting to enjoy his donut head with their morning coffee. 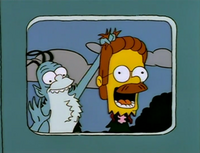 Bart has a nightmare where the bus crashes and wakes up very paranoid. Bart and Lisa get on the bus one rainy morning with Principal Skinner on the bus. Lisa informs everyone Bart's feeling upset this morning, and asks they act nice to him, causing everyone to laugh at him instead. Shortly after the ride starts, Bart notices a Gremlin on the side of the bus, damaging it. He tells Milhouse about it but Milhouse refuses to look, in case he gets attacked by bullies. Bart then tells Otto about the Gremlin. Otto looks out the window to see Hans Moleman driving an AMC Gremlin and rams him off the road, killing him.

Bart sees the Gremlin again and tells everyone. Everyone looks out the window but the Gremlin was hiding again. Meanwhile, in a UFO, Kang and Kodos laugh at the Earthlings getting panicked over a creature that doesn't exist, only to find a Gremlin ripping apart their ship. Back on the bus, Bart is told by Skinner to stop using his imagination and Skinner closes the window blind. Bart then opens the blind again to see Groundskeeper Willie, who needed to get the bus after his mule refused to carry him. Milhouse gets weirded out by Bart's behavior and goes to sit next to Üter Zörker instead. When Bart starts shouting about the Gremlin again, he is tied to his seat by Willie and forced to sit next to Üter, who Bart befriends and asks to untie him.

Bart sees the Gremlin again and grabs an emergency flare to throw out the window at the Gremlin, getting half sucked out the window in the process. Bart throws the flare as he is pulled in by Willie and Skinner, hitting the Gremlin and sending it into the path of Ned's car. Ned decides to care for the Gremlin as the bus finally reaches the school broken. Everyone realizes that Bart was telling the truth but due to his behavior, Bart was shipped off to the New Bedlam Rest Home for the Emotionally Interesting. On the way, the Gremlin attacked the ambulance, holding Ned's severed head.

They originally had a story to go with the famous Dogs playing Poker picture (Homer's frightened at this painting), but Bart said it was too twisted and scary to show on TV. So they had to put a random story about vampires together. 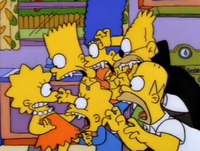 The Simpsons attack Lisa, as vampires.

The Simpsons are watching a news report on TV about a local peasant who was found dead with their blood sucked out through fang holes on them. The news then goes on to report that Mr. Burns had bought out the Springfield Blood Bank. Burns then invites the Simpsons for a midnight dinner in Pennsylvania. There, it is obvious Burns is a vampire, but no one seems to believe Lisa. She and Bart find Burns's secret vampire lair where they find the book Yes, I Am a Vampire, proving that Burns is a vampire. Lisa escapes up the stairs again whilst Bart sees the lever that turns the staircase into a "Super Fun Happy Slide", pulling it against his better judgement and sliding down to the bottom again, only to be captured by Count Burns. Lisa tells the rest of the family that Bart was captured and Burns is a vampire, but Burns and Bart show up, with Bart being turned into a vampire. The family refuses to believe Lisa and they go home.

At home, Lisa is tormented by nightmares and, hearing something, opens her bedroom curtain and sees Bart, Milhouse, Martin, Ralph, and Janey, all vampires who are hovering in the air. Bart flies through her window violently, only to be stopped by Homer and Grampa. Finally believing Lisa, Lisa tells the family that the only way to cure Bart is to kill the head vampire, Count Burns. The family drives back to Burns' lair in Pennsylvania and Homer hammers a stake in Burns' heart and kills him but gets fired in the process. They then go back home thinking that everything is fine now. The next morning at breakfast, Lisa finds the rest of the family are vampires. It turns out that Marge is the real head vampire ("I do have a life outside of this house, you know"); the vampire family surrounds and corners a terrified Lisa ... but then stop suddenly. The whole family then happily wish the audience a Happy Halloween in a Peanuts-style ending, singing and with Milhouse playing a tiny piano like Schroeder.

Conan O'Brien put a lot of work into the wraparounds to pull the whole episode together.[1] Greg Daniels and Dan McGrath wrote "The Devil and Homer Simpson" segment. They would always write for the Halloween episodes together.[2] The scene where Flanders the Devil goes from his giant monster form to nothing had a flash of the actual Ned's face, which was suggested by Brad Bird.[3] Scenes cut from the first segment include a scene of Homer being bowled in Hell, and Bart pestering Flanders for a race car. Both of these scenes were later included in "The Simpsons 138th Episode Spectacular".[4]

For "Terror at 5 1/2 Feet", David Silverman used both the William Shatner and John Lithgow's portrayals of Robert "Bob" Wilson in "Nightmare at 20,000 Feet" for Bart's mannerisms, but mostly Shatner.[3] A lot of work was put into the design of the Gremlin to make him scary in the Simpsons universe.[5] Üter Zörker was originally made as a one-off character, but became a recurring character.[3]

"Bart Simpson's Dracula" was written by Bill Canterbury.[6] The segment was visually based on the Francis Coppola version of Bram Stoker's Dracula.[3] The neon writing for the Secret Vampire Room was also supposed to have an arrow on, but the animators forgot it.[4] They didn't have enough money to go back and animate it in.[3] The scene where Bart and the kids are floating outside of Lisa's window is inspired by The Lost Boys.[4] A joke got cut where E.T. was flying through the sky with Elliot and the vampire children attacked them.[6] Dave Mirkin suggested the Peanuts-inspired ending to the episode.[4] Another scene that was cut had Homer open a coffin with a load of Christmas decorations in, which would then appear in the final scene.[7] The credits music took inspiration from both The Munsters and The Addams Family. The electric guitar was from The Munsters whilst the timing and the clicking was from The Addams Family.[3]

The episode finished 17th in the ratings for the week of It originally aired, with a Nielsen rating of 14.5. It was the highest-rated show on the Fox network that week.[8]