The Trouble with Trillions

"The Trouble with Trillions" is the twentieth episode of season 9 of The Simpsons and the one-hundred and ninety-eighth episode overall. It originally aired on April 5, 1998. The episode was written by Ian Maxtone-Graham and directed by Swinton O. Scott III. It guest stars Paul Winfield as Lucius Sweet.

"When Homer's unfastidious tax return accidentally falls into the severe audit bin at the IRS, he is promptly nabbed by the government. Forced to go undercover for them, Homer finds himself on a mission to retrieve a trillion dollar bill stolen by Mr. Burns." 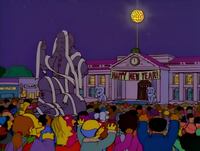 The town counts down to the new year.

On January 1, right after New Year's Eve, Ned completes his yearly taxes. Later that year on April 15 everyone else in town is in a rush to get their taxes in before midnight, in fact just before midnight Homer realizes he did not do his own taxes not realising that he has to do them every year. He rushes and provides false information before driving to the post office. At the IRS, however Homers overstuffed envolope gets jolted from a container for 'Tax refunds' into one labeled 'severe audit'. The IRS discovers Homer's fraud and arrests him. Held by the government, Homer says he will do anything to stay out of prison. Agent Johnson of the FBI decides that Homer can be useful. With a hidden microphone under his shirt, Homer uncovers that his co-worker Charlie leads a group planning to assault all government officials.

With his superiors impressed, Johnson sends Homer on a secret mission. They reveal that in 1945, President Harry S. Truman printed a one trillion-dollar bill to help reconstruct post-war Europe. He handed the vital cargo over to Charles Montgomery Burns to transport to the Europeans. However, the money never arrived, this is made out to be why Europeans are snotty to Americans. and the FBI suspects Burns still has the money with him. As satellite photography can only confirm that the trillion-dollar bill is not on the roof, Homer is sent in to investigate. Arriving at Burns's estate, Homer searches for the money before Burns, who believes Homer is a reporter from Collier's magazine, reveals that he kept the bill on his person. Johnson and Agent Miller burst in and arrests Burns for grand-grand-grand-grand-larceny. Burns shouts how the US government oppresses the average American and tells Homer to write, "Don't let the government push you around!" in his article. Moved by Burns's speech, Homer knocks out the FBI agents and frees Burns.

The two men hurry to obtain Smithers for help, who suggests they leave the country. Burns takes Smithers and Homer in his old plane, setting off to find an island and start a new country. Over the Caribbean, Burns finds a fine island, although it already has a name and is in fact a country, Cuba. Going before Fidel Castro (after learning, much to the surprise of both Burns and Homer, that Batista is no longer leader of Cuba), Burns fails to buy the island when Fidel asks to see the trillion dollar bill, and is handed the bill. When Burns asks for it back, Castro immediately responds: "Give what back?". Then, the episode immediately cuts to a scene where Burns, Smithers, and Homer are on a make-shift raft. Burns announces he will merely bribe the jury when Smithers, Homer, and himself are put on trial, prompting Homer to exclaim "God bless America!" and salute.