The Simpsons: Tapped Out (TSTO) is a free game for iOS and Android, developed and published by Electronic Arts, first released on February 17, 2012 on iOS, then released on Android on January 23, 2013 and on Kindle Fire on June 24, 2013. The game consists of the player helping Homer and other characters to rebuild Springfield and features the cast of the show.

D'OH! Homer accidently caused a meltdown that wiped out Springfield. Now, it's up to you to rebuild it. From the writers of The Simpsons, tap into a city building game that lets you create your own living, breathing Springfield...for FREE. Recreate Springfield just like you want it, as you help Homer find Marge, Bart and the rest of his family and friends. Complete comic quests like making Apu work ridiculously long shifts at Kwik-E-Mart, growing and harvesting Tomacco on Cletus's Farm, partying down with Duffman at Duff Brewery, and more. Finish jobs and tasks to earn currency and...mmm, donuts. You can even get social and visit your friends' versions of Springfield. Make mischief and play pranks on their towns to collect cash. But remember, they can do the same to you. We told you that this game is life-ruiningly fun.
--Official description by EA.com

THIS GAME IS LIFE-RUININGLY FUN! Homer accidently caused a meltdown that wiped out Springfield. D'OH! Now, it's up to you to rebuild it! From the writers of The Simpsons, tap into a city building game that lets you create your own living, breathing Springfield... for FREE.
--Description at iTunes Singapore

Homer is at Springfield Nuclear Power Plant, and instead of working, he is playing The Happy Little Elves Game on his MyPad. His negligence results in the Power Plant and the whole Springfield blowing up. Homer starts rebuilding the town, and is soon aided by other characters. 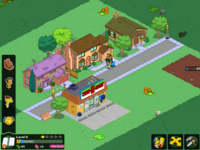 An example of a town.

To play the game, players needs to tap on things. Tapping on characters will open their task menu, from where players can select different tasks for the character to do. After completing a task, the player is rewarded with cash (

). Cash allows the player to buy more buildings, land and decorations while XP allows the player to level up and unlock more content. Placing buildings, will reward the player with new actions for their characters to perform and some will unlock a new character. Buildings will reward you with Cash and XP when you tap them every certain time. The Player is also able to decorate their Springfield as they want with the numerous buildings and decorations purchasable from the build menu, and is free to move them around. Placing enough types of decorations and buildings will increase your Conform-o-meter up to a maximum of 5 starts, giving a small bonus to all your characters and buildings tasks.

Collecting all characters from a character group will result in a reward. Players can see the characters they've unlocked by tapping on the Homer Statuette on the build menu.

Characters with a speech bubble

have a quest. Tapping on this character will start the quest, usually showing some dialogue. The player is required to send characters to different jobs, build a certain building or place some decorations for completing the quest, and will be rewarded with Cash and XP once completing it. Tapping on the Task book on the left side of the screen will allow you to see all the active quests you need to complete. Completing quests will also unlock more content.

Each day, players can also complete daily challenges to win extra cash and XP. The game offers also many other different sources of income such as growing crops in Cletus's farm, betting on who will win in the Springfield Downs and buying Scratch-R's or programing the broadcast of the Channel News and the Radio Station, as well as trying to catch Sideshow Bob (if not already bought).

The player can add friends via Facebook Connect, Gmail, their device's contact list and EA's Origin. After the player has added some friends, they can visit their versions of Springfield to complete three tasks each day, which results in more rewards, as well as Friend Points (

), which will unlock unique prizes. The maximum number of friends you can add in Tapped Out is 100. The game also includes a generic town named "Other Springfield".

– Android didn't from the start enable players to visit their friends' Springfields.

On March 3, 2012, due to connectivity problems, Tapped Out was removed from the App Store.[1] In mid-June 2012, EA took the game offline to fix the server, and to fix the Springfields which experienced problems.[2]

It was announced on August 14, 2012 that The Simpsons: Tapped Out would return to the United States App Store later that week, and it would relaunch worldwide (apart from Germany and Canada) in either September[3] or later in August, with improved gameplay and enhanced graphics.[4] With the relaunch, there will be new content in Tapped Out, Kotaku says it'll be packing new stuff from the latest season of The Simpsons. Other outlets say it'll have some new visuals as well as mechanics.[5] It was re-released two days later, on 16 August. After December 5, 2012, EA upgraded their software to meet the constant demand of new and improved devices, and warned that the game may not work on 1st or 2nd generation iPhones or iPods anymore.[6]

The Android version of the game was released on January 23, 2013 in the Netherlands and Australia; the ninth content update was included with the release.[8] The game was added to the Google Play store in other countries on February 6, 2013. The game was made available on Kindle Fire devices in many countries on June 24, 2013.

Characters and their tasks

A screenshot of the first slide of The Store.

The Store is an in-game store where you can use in-game cash to buy decorations and buildings, as well as the premium in-game currency called "donuts" (the cost of which will be charged to your iTunes or Google Wallet account). The donuts purchased can be used to speed up activities (jobs, quests, building times) and also to buy premium characters, buildings and decorations that can only be acquired with donuts. You can also trade donuts for additional in-game cash. The First Time Packs update introduced some bonus prizes the first time the packages from 60 to 2.400 were bought.

The levels for the game with content go from Level 1 to Level 60. After reaching Level 60 the player can level up to Level 939.

On April 1, 2015, an Upgraded Mystery Box was added to the game with an improved list of objects.

A Mystery Box gave the player one of these objects till March 31, 2015. 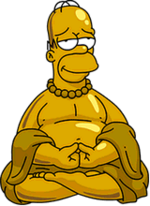 15 and gave the player one of these premium objects. Available until March 31, 2015.

Reaction to the game

"We want this to be one of the biggest titles this year," EA SVP of global publishing for social and mobile Bernard Kim told CNET. "We've invested a lot. It's absolutely a top-tier development priority for us. Hardcore Simpsons fans will get a lot out of it."[9]

On February 17, 2012, the free Tapped Out app appeared on the Sweden, Singapore, Norway, Denmark and Finland's App Stores. It was later added to Canada, the United Kingdom and several other countries, with the United States receiving the game last. On March 1, the reaction to the app being released in the United States was so overwhelming, that it created connection problems.[10] On March 3, 2012, three days after the US release, the app was removed from every App Store (with the exception of the Canada app store; the game was removed later), so "to make sure you current players have the best possible experience".[1]

Most connection problems have been fixed since then, but the bugs were the main problem with the downloaders of the game. Tons of bugs were reported on the Tapped Out forum, mostly reported was the "DC while loading friends city bug".

View in 720p for best quality by clicking on the cog

Maggie / The End of the Beginning

The Return of Radioactive Man

The Simpsons regularly references Tapped Out in the years since its release.