The Krusty the Clown Show

The Krusty the Klown Show began as early as 1957, and started off as a serious talk show. The show soon devolved into a children's entertainment show which became extremely popular. Until the 1970s, Krusty hit the kids with a stick if they didn't laugh. A documentary was made about this called Circus of Shame.[1] The show involves slapstick humor, comedy skits starring members of the show, and occasional special guest stars along with often questionable sponsors like Percodan.

The show faced competition with a popular ventriloquist show, The Gabbo Show, resulting in a rapid ratings drop that left it below even Channel Ocho, and it was soon canceled. Siblings Bart and Lisa helped Krusty to air the Krusty Comeback Special, starring many celebrities including his half-brother, Luke Perry, and the Red Hot Chili Peppers. The show soon became popular again, while the Gabbo show fell from grace due to the doll accidentally swearing at the audience.[3]

The show was temporarily possessed by the IRS after Krusty was caught for tax fraud.[4]

Later, the show was criticized by the FCC for not being educational enough. In response, a children's news segment called Kidz Newz was created, with children being the news anchors. The segment gained popularity after Bart Simpson became an anchor for the segment and created an additional human interest segment called Bart's People. The segment was later canceled and replaced.[5]

In 2001, The Krusty the Klown Show faced competition with another show once again, this time with a quiz show called Me Wantee!. Fed up with network executives attempting to get him to drastically change the content of the show, Krusty announces his retirement. The last episode of the show was a special farewell episode. During the episode, Sideshow Bob, who was released from prison days before, planned to kill Krusty in revenge over Krusty constantly mistreating Bob during his career. To kill Krusty, Bob brainwashed and hypnotized Bart Simpson into killing Krusty, and straps bombs on Bart which will detonate when Bart comes up to hug Krusty on stage after Krusty's speech to the audience. However, Krusty unexpectedly apologized to Bob on stage for mistreating Bob, causing Bob to do everything he can to stop Bart. Mr. Teeny ultimately saved Krusty by throwing Bart's bomb strap into a room full of network executives, killing them instead. The show's ratings rose once again due to Sideshow Bob's attempted murder (which Krusty enjoys due to the ratings that are brought to the show every time Bob attempts to kill him).[6]

Some time during the show's history, Krusty and Sideshow Mel shot episodes of The Krusty the Klown Show in German for German consumption (This is a reference to a similar situation that occurred to the Monty Python troupe, who were compelled to create special German-language episodes of Monty Python's Flying Circus to clear German-specific content laws that were in force in West Germany at the time. The episodes were filmed at a Bavarian TV studio in Germany).

The Itchy and Scratchy ShowEdit

See The Itchy and Scratchy Show

Members of The Krusty the Clown ShowEdit 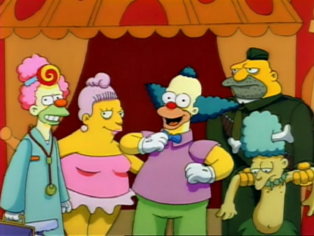 The cast of the Krusty the Clown show