Storytown Village (also called Storytime Village) is a small theme park for children between the ages of 1 and 7½.

The park contained animatronic recreations of storybook characters, including Mother Goose and the Three Little Pigs. The park also had a petting zoo, where guests could feed the animals,[1] and a ferris wheel.[2]

Storytown Village went out of business after a child was decapitated in the park. The abandoned park was donated to Ned Flanders, who converted it into a Christian theme park called Praiseland, which itself later closed down due to a gas leak.[2] 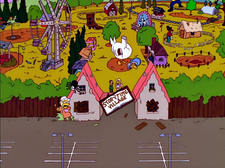 Storytime Village, after it closed down