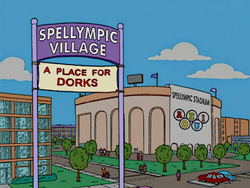 The Spellympics is an annual spelling tournament. It is hosted by George Plimpton.

Lisa made it to the Spellympics after winning the state spelling bee. George Plimpton, who hosted the event, kicked off the event with the releasing of bees, then the Blue Angels to exterminate the bees. The competition then began.

Lisa made it through to the final three, along with Alex and Sun Moon. George Plimpton spoke to Lisa privately and told her that he wanted Lisa to throw the competition so Alex could win. In return, Lisa would get access to any of the Seven Sisters colleges she wanted, and a hotplate. The next day, Sun Moon got eliminated after being given the word "whether". When she started to spell "weather", she got eliminated. Alex was then given the word "rigged", which he spelled correctly. Then it got to Lisa's turn. Homer showed up to the final and Lisa decided not to throw the competition. Lisa then told the audience that the competition was rigged. She then spelled her word but made a mistake. George Plimpton quickly eliminated her and told her that she would get nothing. As a result of Lisa's elimination, Alex won the Spellympics.

The Spellympics is a parody of the Olympics.