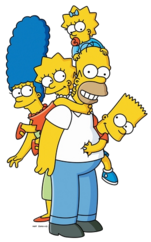 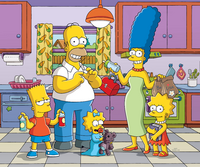 Artwork of the Simpson family from season 29 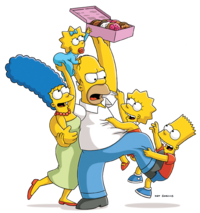 Artwork of the Simpson family from season 27 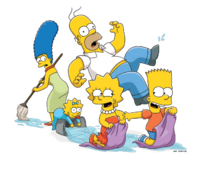 Artwork of the Simpson family from season 24

The first known Simpson was Sven. He married Claretta Elthridge and had two children. One of them, Rupert, married Winifred Running Goat, a Native American. They had five children, which included Trixie and Garwood. Trixie married Gaylord Stemple and they had three sons. Garwood married Clowta Stillman, and they had four offspring. Howland married Gabby Crouse and he had five children. They were Lou, Dulcine, Hugo, Gaston and Old Tut Simpson. Lou married Zorina Ovadia and they had three children: Eckhardt, Bob and Twyla. Twyla married Woody Schedeen and had daughters Fernice and Ingrid, and Eckhardt married Griselda Johnson and had two sons and two daughters named Verna, Vern, Eckhardt, and Lotus.

Old Tut Simpson married "Happy" Dinsdale and they had four children, including Orville. Orville married Yuma Hickman. They had Abraham Simpson and his brothers. They moved back to the US and Abraham met Mona. They had Homer, who married Marge Bouvier and had Bart, Lisa, and Maggie. Abe also had an affair with an unknown woman, which resulted in Herb, adopted by the Powell family, and a short affair with Edwina, which resulted in Abbey.

Artwork of the Simpson family from season 30

Relatives with an unknown or unclear position in the family treeEdit