Rod has an aunt called Aunt June.[1] He also has a twin brother called Dodd Runtledge.[6] 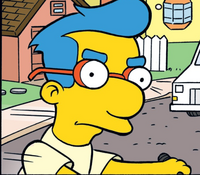 As Rod Runteledge had gone out to help Radioactive Man, his mother was worried and called the police, eventually finding him and taking him home. It was hours later when Rod was able to get out and go and rescue Radioactive Man.[7]