Radioactive Man, previously known as Radio Man, is a comic book superhero who acquired his powers after surviving an atomic bomb explosion. His sidekick is Fallout Boy.

At some point, superheroes were banned and outlawed by the government, with only Radioactive Man being allowed to continue operating under the government. Heart of Darkness went to Radioactive Man as he was convinced it was a government plan to form a shadow government that the public didn't know about. This led to them uncovering a plan to get the superheroes out of the way and make them look bad. However, they stopped the plan and the superhero ban got repealed.[10]

The Death of Radioactive Man 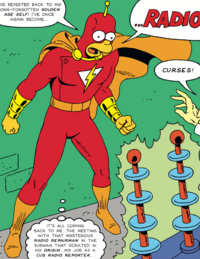 In the Golden Age, Radioactive Man was known as Radio Man. Radio Man didn't have a lightning bolt sticking out of his head and had control over radio waves. Claude Kane III became Radio Man when a mysterious radio repairman in the subway gave him his powers.

Radioactive Man once turned back into Radio Man when Dr. Crab, who was then going by the name of Prawn, used his Regresso Ray to make him human again. Radioactive Man got caught in the rays and turned into Radio Man. Dr. Crab then tried to use his Airwave Silencer to shut down all televised and radio media, but Radio Man bounced the airwaves back, destroying the machine. He then knocked Dr. Crab out.

Radioactive Man Re-Rises is a reboot of the Radioactive Man series. In the film, Radioactive man has to erase his own memory so he doesn't get tortured by his past when he gets born in the future. Radioactive Man's suit is also the only thing keeping him alive, but is also slowly killing him.[14]

Radioactive Man can be fairly naive and patriotic, which leads to him believing and trusting everything the government says, whether it's bad or good. He once attacked a peaceful hippie protest outside the White House because they were protesting against the government, which led to Bleeding Heart stopping him.[4] After superheroes got banned by the government, Radioactive Man was the only one allowed to continue operating as he was too gullible and naive to question the government.[10]