"Since I'm sure you'd only resent the pity of an eight-year-old niece, I'll simply hope that you're one of the statistically insignificant number of forty-year-old single women who ever find their fair prince."
―Lisa to Selma

"Principal Charming" is the fourteenth episode of season 2. It was first broadcast on February 14, 1991. The episode was written by David M. Stern and was directed by Mark Kirkland.

"Marge enlists Homer's help to find Aunt Selma a husband—and ends up pairing Principal Skinner with Aunt Patty. Meanwhile, Bart gets in trouble for using sodium tetrasulfate (a potent herbicide) to spell his name out in the grass and gets sentenced to reseed the field."

Patty and Selma visit the wedding of a man who could have easily been Selma's husband, had Patty not gotten in the way. Selma realizes she needs to find a husband and begs Marge to help her. Marge enlists Homer's help but he fails to find anyone suitable. Meanwhile, Bart pulls a big prank by pouring the fictional chemical sodium tetrasulfate onto the grass. As Bart had used it to spell his name, Principal Skinner easily catches him. In the principal's office, Bart is told to call his father, who is at Moe's Tavern.

After Bart asks for Homer Sexual, Skinner takes the receiver as Moe verbally assaults the principal, thinking Skinner is the person who has been making prank calls to his tavern for years. (Bart, of course, is the culprit.) Realizing his error, Moe hands Homer the phone. Homer goes to the school and decides Skinner is the perfect man for Selma. He invites Skinner to meet her, but he falls for Selma's identical twin sister, Patty, instead. Skinner starts to go out with a slightly unwilling Patty, who has not come out of the closet yet, much to Selma's increasing chagrin. Meanwhile, Bart takes advantage of the opportunity to get out of his punishment of re-seeding the grass field and soon takes control of the school. Skinner enlists Bart's help to get Patty to marry him, while Homer fixes a date between Selma and Barney.

Skinner takes Patty to the top of the Bell Tower to propose. Following Bart's lead, he has written "Marry Me, Patty" in 40-foot letters using the sodium tetrasulfate that got Bart in trouble. Patty is flattered, but declines. In his grief, Principal Skinner sees what has happened to the school, and takes back control by putting Bart back on his punishment. Patty informs Selma of events, so she breaks up her own date. Things then return to normal. 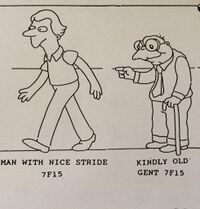 This was Groundskeeper Willie's first appearance and Dan Castellaneta, who was assigned to voice him, didn't know which voice to use. Sam Simon suggested he use an accent and after going through a Spanish and "big dumb Swede" voice, they settled on a Scottish accent.[1]

Josh Weinstein revealed in a tweet that Hans Moleman was originally known as "Kindly Old Gent" in the planning stages.[2]

"Principal Charming" holds a rating of 7.5 on IMDb.[3] Nathan Rabin of AV Club says "This stellar episode ends on an appropriately bittersweet note: "Principal Charming" does justice to both the tragic and comic side of these tragicomic and brilliantly conceived supporting players." The episode also holds an A- rating on AV Club.[4]