"Now, at the risk of being unpopular, this reporter places the blame for all of this squarely on YOU, the viewers."
―Kent Brockman[src] 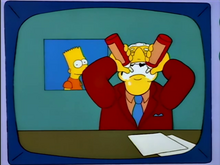