"Judge Me Tender" is the twenty-third episode and season finale of season 21. It originally aired on May 23, 2010. It guest stars Ryan Seacrest, Randy Jackson, Ellen DeGeneres, Kara DioGuardi, Simon Cowell and Rupert Murdoch.

"American Idol host Ryan Seacrest and judges Simon Cowell, Randy Jackson, Kara DioGuardi, and Ellen DeGeneres welcome a new judge to the show – Moe, who displays an exceptional talent in judging things; while Moe is away, Homer has more time to spend at home with Marge... much to her dismay." 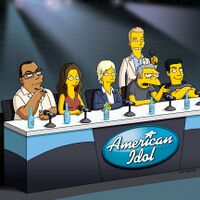 Moe as a judge in American Idol

At an ugly dog contest, Krusty is realized to be a horrible judge and Moe makes cracks about his judging. Krusty decides to have Moe judge and he turns to be mean, yet hilarious. The Springfieldians cheer at Moe's judging, however, Santa's Little Helper (named Satan's Little Helper) doesn't appreciate the fact he won, even though he was revealing a painted butt. Moe decides to judge around Springfield and he is soon asked to go into professional judging, choosing to go to American Idol. Unfortunately, he has to close down his bar, upsetting Homer and the gang.

Homer spends a lot of time at home with Marge, driving her crazy with him appearing in her locations. Moe meets Simon Cowell at Hollywood and Simon warns him that even though his mean judging is hilarious, he could get emotionally scarred by losing his friends and family. Moe decides to keep it low and be helpful but semi-mean. Meanwhile, Homer really drives Marge crazy and she drags him to a sports bar, saying "he deserves a treat after staying at home." Meanwhile, Lisa goes to Santa's Little Helper and admits that he's really a good-looking dog, and they scoot together in happiness.

Moe judges his first episode of American Idol, complimenting one of the competitors on a revised 'Happy Birthday' along with Randy, Kara, and Ellen, who sits right next to him. Simon, however, reverts back to his old ways and Moe realizes he's been double-crossed. He threatens to break his voice box and is soon banned from going to California ever again. Homer, however, is forced out of the sports bar ("Y'know, maybe that bar (points to gay bar) is for you") and Marge puts him in golf. Soon, a senior comes up to Marge and tells her that if Homer plays, he'll forget about birthdays, anniversaries, weddings, and more. Marge decides to take Homer home and they have sex.

Moe returns to Springfield and reopens his tavern. He is forbidden from ever making judgements about anything. The bright side, he says, is that he can never watch FOX again, and that the bar has become more successful thanks to that. A large group of people enter the tavern, and Rupert Murdoch approaches the bar to ask Moe to put on the Jay Leno show. Moe does so, and we see Leno mocking of the BP on TV. Murdoch laughs while Homer and Marge look at him confused.