"Itchy & Scratchy Land" is the fourth episode of season 6 of The Simpsons and the one-hundred and seventh episode overall. It originally aired on October 2, 1994. The episode was written by John Swartzwelder and directed by Wes Archer.

"Bart and Lisa ask their parents to take them to Itchy & Scratchy Land – the "violentest place on earth." While there, Homer and Bart are arrested, and malfunctioning Itchy & Scratchy robots attack the Simpsons, a la Westworld. They escape with their lives and conclude it was indeed an entertaining vacation." 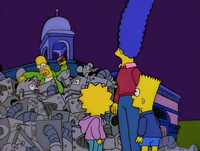 The animatronics are destroyed.

Bart and Lisa see a commercial for the new amusement park named Itchy & Scratchy Landand immediately want to visit it. Marge has already booked a family vacation to a bird sanctuary, but after revealing that the theme park has a place for adults, Bart and Lisa win their parents over, on the condition that they will not embarrass Marge as on previous holidays. After a long car journey, they reach Itchy & Scratchy Land parking lot, where they are then flown to the park by helicopter and told nothing can "possibly" go wrong.

Marge is slightly uneasy with the many references to violence at the park, but has an enjoyable time visiting the various violent attractions, which include a parade filled with Itchy and Scratchy robots. Homer and Marge eventually tire out and spend time away from the kids at the nearby "Parents Island" as Bart and Lisa continue having fun. Bart and Lisa also visit a movie theater, where a documentary about the history of Itchy & Scratchy is being presented, including clips of the old Itchy & Scratchy films "Scratchtasia" and "Pinitychyo". Although going well, the family's vacation is ruined when Bart launches a stink bomb onto an actor in an Itchy suit and is captured by park security. Homer is also captured for "kicking an Itchy in the butt." Marge is informed of her son's and husband's transgressions and is immediately embarrassed.

Meanwhile, Professor Frink, chief of the animatronic robots in the park parades, tells the other staff that, according to chaos theory, all the Itchy & Scratchy robots will turn on their masters; this happens seconds after he makes the announcement. Bart and Homer are released and just as Marge is chewing them out, all power is cut and a horde of Itchy and Scratchy robots advance on them. Homer frantically throws everything he can at them and discovers that the flash of a camera short circuits the robots' systems. The Simpsons then grab dozens of cameras from a gift shop and defeat the entire Itchy & Scratchy army. The family is thanked for saving the park and agree that it was their best vacation ever. Regardless, they decide to never to speak of the trip again.

"Itchy & Scratchy Land" was written by the entire The Simpsons writing team, but was credited to John Swartzwelder. This episode was very difficult to produce; it involved creating an entirely new environment, which meant large amount of writing and all new sets.[1] At the time when the episode was being produced, new, more stringent, censorship laws had been put in place. As a result, FOX attempted to stop the writers from including Itchy & Scratchy cartoons in episodes. In response, the writers created this episode, which they decided would be as violent as possible. The network threatened that if the episode was produced, they would cut the Itchy & Scratchy parts out themselves, which was most of the episode. FOX later relented when then-showrunner David Mirkin threatened to reveal this to the media. The writers nevertheless promised to try not to overdo the violence and in some scenes the violence was cut.[1]

Although the episode was quite difficult to animate, "Itchy & Scratchy Land" was "a dream come true" for the animators, as they quite enjoyed animating scenes filled with violence.[2]

"Scratchtasia", featured in this episode, is one of David Mirkin's favorite Itchy & Scratchy cartoons.[1]

In 2003, Entertainment Weekly made a list of the Top twenty-five episodes, and placed this episode in seventh place, saying "When the animatronics attack, the showdown between man and machine -- okay, Homer and a giant robot mouse -- is an uproarious rebuttal to capitalism run amok."[3] Warren Martyn and Adrian Wood called it "an untypical episode, with an especially thin plot. But anyone that's been to Disneyland will get the point." The episode is number six on MSNBC's top ten The Simpsons episodes list, compiled in 2007.