Buzz Cola is a popular cola drink in Springfield.

Bart is often seen drinking it whilst Homer drinks Duff beer. Buzz Cola with Lemon was introduced by Mayor Quimby at the opening of the Snowball II Municipal Cat Park with the slogan "damn, that's a lemony cola!"[1] 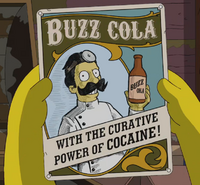 Buzz Cola as it appears in The Simpsons: Hit & Run.

Buzz Cola plays a major role in the video game The Simpsons: Hit & Run. In the game, Krusty the Clown promotes a "new improved Buzz Cola", which in reality is a drink made by Kang and Kodos that makes people crazy. Their plan is to drive the townspeople insane and destroy their own town, all which would be shown on a reality show called Foolish Earthlings. The aliens planned to put up stands in the Springfield Squidport giving out free ray guns, so that the cola-infected townspeople would shoot each other and cause major carnage. The Simpsons and Apu expose their plan, and Bart destroys all the ray gun stands. However, the aliens instead spread the cola through the water supply, which instead of turning the people of Springfield crazy, it awakens the dead. Kang and Kodos are later defeated when Homer uses radioactive waste to destroy their spaceship.