"Bart the Genius" is the second episode of season 1 of The Simpsons. It originally aired on January 14, 1990. The episode was written by Jon Vitti and directed by David Silverman. Marcia Wallace guest starred as Edna Krabappel and Ms. Melon.

"Bart swaps papers with Martin Prince, Jr. during an intelligence test at school. When the school psychologist compiles the test results, he believes the switch and refers Bart to the Enriched Learning Center for Gifted Children. The new school's laid-back liberal ethos suits Bart just fine - until he's asked to show evidence of his neglected genius." 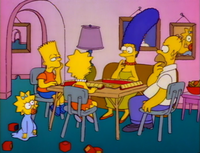 The episode begins as the Simpson family plays Scrabble in the living room, in an effort to build Bart's vocabulary for his aptitude test tomorrow at school. The game ends when Bart cheats and makes up an imaginary word, "Kwyjibo", and defines it as, "A big, dumb, balding, North American ape with no chin." Homer's instantly angered and chases Bart out of the room. The next day before class, in the schoolyard, Martin Prince, the school genius, tattles on Bart, for spray painting graffiti defaming Principal Skinner on the school building. Skinner orders Bart to see him after school.

As the children file into class, Mrs. Krabappel hands out aptitude tests to everyone. When she instructs the class on taking the timed intelligence test, Martin raises his hand, and reminds her Bart's supposed to face the window during any test so he can't cheat. A grumbling Bart turns his desk to face the window and the test begins. In an attempt to figure out a lengthy math word problem, Bart tries to visualize the problem so he can solve it. The visualization turns into a daydream and when Bart finally comes back to reality, Martin announces he finished his test already, and Mrs. Krabappel allows Martin to go outside to read a book during the remainder of the testing period. While Bart's still taking his test, he looks out the window to see a smug Martin sticking his tongue out at him. In retaliation, Bart sticks his tongue out and makes faces at Martin after Martin does the same as well; Mrs. Krabappel spots Bart making faces and looks out the window to see what Bart's looking at. While her back is turned, Bart, seated at the front of the class, reaches over to Mrs. Krabappel's desk and steals Martin's test, replaces Martin's name with his own and puts the test back on her desk. Bart quickly fills out random answers on his own test, writes Martin's name at the top, and turns it in. 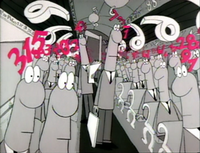 Later, after school, Marge and Homer are called to Principal Skinner's office for a meeting about Bart's behavior at school. Skinner informs Marge and Homer about Bart's graffiti from earlier. As he reaches for Bart's rather extensive permanent record, and is about to suggest something along the lines of an extreme penalty for Bart, his secretary buzzes in and says Dr. J. Loren Pryor, the school psychiatrist, is waiting to see him. Dr. Pryor walks in on the meeting, and surprises everyone when he tells them Bart's a "gifted child," and according to the aptitude test from earlier, Bart has an I.Q. of 216. Dr. Pryor suggests Bart's history of bad behavior stems from a lack of interest in his school work, due to the fact it's too easy for him. Skinner wants Bart retested, but when Dr. Pryor suggests moving Bart to a school for "gifted children", Skinner jumps on board with the idea, and Bart quickly agrees when he hears the school doesn't have much structure and you get to make your own rules. Dr. Pryor hands Bart some paperwork for the "gifted children" school, and he, Homer and Marge leave the meeting stunned. 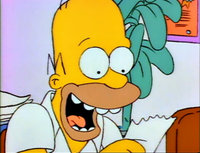 The next morning at the breakfast table, Marge and Homer hover around their new genius child and Homer tells Lisa to start eating what Bart eats for breakfast, so she can become a genius too. However, Lisa's not fooled by Bart and knows he's still just a dimwit. After breakfast, Homer takes Bart to the "Enriched Learning Center for Gifted Children". Once inside the school, they find Bart's class, and, after peeking in, they see all of the boys are wearing ties. So Homer gives Bart the tie he's wearing, gives Bart a little pep talk about his first day at the new school, and shoves him in the classroom door. Once inside the class, Ms. Melon, the teacher, introduces herself and the new classmates to Bart and shows him around the classroom. She tells Bart about the independent learning and the only rule is for him to make his own rules. Class begins with a debate on the topic of free will and the paradoxes it creates; Bart struggles to understand the discussion. Later at lunch, Bart's classmates realize Bart isn't really that smart when he accepts their ridiculously uneven trade offers (Ex: 1000 Pico liters of milk for 4 gills worth. A gill's much, much larger than a Pico liter). A dejected Bart walks away from the lunch table as the other kids laugh at him.

After school, Bart relaxes in his room, when Homer walks in to see about Bart's first day at the new school. Homer suggests they all go out for frosty chocolate milkshakes, and Bart agrees. Just then, Marge walks by, and tells Homer and Bart she bought tickets to the opera in an effort to try to help nurture Bart's brain. Later, during the opera, a bored and impatient Homer and Bart goof off and cut each other up, even though they're continually shushed by an upset Marge. Cut to the next day at school, where Bart feels even more stupid and left out when he can't understand a calculus problem on the chalkboard. Later, as a sad Bart walks home from school, he passes by the playground of his old school, where Richard, Lewis, and Milhouse are shooting marbles. When Bart greets them and tries to talk to them, they treat him like a nerd, call him names, and tell him to get lost. Cut to dinner later, as a depressed Bart eats, Marge reminds everyone they can't be late for the film festival for which she bought tickets a way to nurture Bart's brain. Bart is reluctant to go to the festival, and Homer tells him they don't have to. Just as Bart's about to tell Homer what's on his mind and confess about the false I.Q. test, Homer insists on going outside to play catch. After playing catch, Bart sees how much being a genius means to Homer and decides not to confess what he did, out of fear of disappointing him.

The next day at the "gifted children" school, while performing a chemistry experiment, Bart accidentally causes an explosion, which results in green goo everywhere. Cut to Dr. Pryor's office, where he meets with a green stained Bart. They discuss the reasoning behind his recent failings at the new school, and Dr. Pryor thinks once again Bart isn't being challenged enough, while Bart suggests he just go back to Springfield Elementary again. When Dr. Pryor wants to know why, Bart makes up an excuse and tells Dr. Pryor he will like to go undercover and study regular kids and their school environment, "to see what makes 'em tick". Dr. Pryor agrees and tells Bart to write up a proposal to present to Principal Skinner while he goes to talk to him. Bart struggles to write a proposal and instead changes his mind and writes his confession. When Dr. Pryor comes back in the office and reads Bart's confession he suddenly realizes Bart was never a genius to begin with. Later at home, a still green stained Bart greets his parents and Homer offers to give Bart a turpentine bath to wash off the green.

Out in the backyard, as Homer gives Bart a bath, Bart confesses about cheating on the aptitude test and tells Homer he loves him and he enjoyed the extra attention from being a "genius". He tells Homer he doesn't think something which brought them closer than they ever were before can be bad. But, Homer doesn't see it Bart's way, and he chases Bart out of the tub, trying to choke him. Bart is too quick for Homer, runs into his bedroom and locks the door. An angry Homer pounds on Bart's door, and tries to coax him to come out, while Bart taunts him from inside his room. Everything is back to normal at the Simpson home.

This episode marked the first time that the opening sequence was used, which was different from the second season opening which would be later introduced in "Bart Gets an "F"".