Agnes Skinner is the strict and bitter mother of Seymour Skinner. She is very harshly controlling of Seymour, and treats him like a mother would treat a small child, once grounding him because he did not say who was at the door after answering it. She hates Seymour's choice in women, especially Edna Krabappel. Agnes has married a total of four times, once with Skinner's father, Sheldon Skinner, and following Sheldon's death she married three more times, each time to a tow truck driver.[3]

In the 1920s, Agnes used to be a wing walker on early planes and performed. Her videos were shown in museums.[4] During the 50s, Agnes was an Pole Vaulter and competed during the 1952 Summer Olympics.[5] However, when she was going over the bar, Seymour kicked in her stomach, knocking the bar off.

When she first appeared as a kindly old woman who embarrassingly called her son "Spanky". According to the DVD audio commentary it is said that her current mean streak can be attributed to the incident involving Bart that took place in that episode in which, while sitting in a urinal stall, Bart caused the toilets to explode. Currently, she is harshly controlling of Seymour, who spends more time with her than with his old girlfriend, Edna Krabappel.

Agnes shares an unhealthy relationship with her son, which often borders on psychosis. Examples include Agnes covering up "her half of the television" with cardboard to spite Seymour. When Seymour was out of the house, Agnes phoned him regularly demanding to be taken out of the bath, shielded from the glare of car lights on the street, and other such petty requests. She hid his car keys as a punishment for his talking to a woman on the phone. Seymour himself is very obedient and almost distressingly physically and emotionally close to her (for example, when Edna agreed to marry Seymour, Agnes murmured under her breath "three in the bed!"). Her catchphrase is "Sey-mour!", often used to snap her son's attention (as opposed to Superintendent Chalmers's catchphrase, "Skin-NER!"). She also uses him to do her bidding.[6]

Some of her resentment to Seymour apparently traces back before Seymour was born. During the 1952 Summer Olympics in Helsinki, she competed in the pole vaulting event while 9 months pregnant.[5] When Seymour made his first kick, he hit the bar, causing her to lose and crushing her dreams.

Her first husband Sheldon Skinner served in World War Two as a member of the Flying Hellfish. Agnes has also claimed that she was married to three tow truckers.

Agnes has been seen with Superintendent Chalmers on a few occasions,[7][8] she also briefly dated the Comic Book Guy, before he was arrested for having a secret room full of illegal videos. He asked her if she would wait for him till he got out of jail but she refuses, saying that her bones are half dust.[9] She once had sex with Otto Mann at the Simpsons' mardi gra party.[10] During the depression she let Mr. Burns "feel her up" (presumably for remuneration).[11] She hinted that she got "intimate" with Groundskeeper Willie when he was turned into a proper gentleman.[12] She once hit on Sideshow Mel,[3] dated Grampa Simpson,[13] hooked up with Willie a second time during "Grownup Halloween",[14] and once got together with Barney Gumble[15] before beginning a serious relationship with the Comic Book Guy. (Chief Wiggum was notably repulsed when he and his officers stumbled upon the couple "in the act".)

In "The Principal and the Pauper", Agnes' biological son, the real Seymour Skinner (voiced by Martin Sheen), returns to Springfield from war. Agnes, unhappy with her new living situation with her biological son, travels to Capital City to take back Armin Tamzarian. She and other Springfieldians, who have grown to like Tamzarian, force the real Seymour Skinner out of Springfield, tying him to a freight train cart headed out of the town. 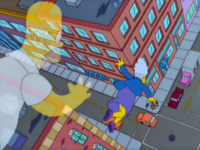 The death of Agnes Skinner in "Treehouse of Horror XI"

Although with no continuity, Agnes is dropped to her death from many stories up in "Treehouse of Horror XI" when Homer is attempting a good deed.

Around 30 years in the future, Seymour keeps her living head in a jar in his and Edna's home, similar to the heads in a jar shown in Futurama.[16] At another point, Skinner is seen having dinner with her skeleton.[17]

This section is transcluded from The Simpsons: Tapped Out characters/Oldies. To edit it, please edit the transcluded page.